I’m dog sitting Jengo for about a week. We just went out for a quick afternoon trot around the block in the drizzle. I don’t get the impression that Jengo does a whole lot of running but I ran him just a little today – a few minutes. I figure any dog should be okay with that. As soon as he dropped back behind me instead of leading the way we walked it off.

It’s been drizzling a lot the last few days – apparently – I’ve been out of town – I thought Georgia was a warm place – pretty cold out there – nice running through Piedmont Park though – and the Botanical Garden there.

When we returned from our space journey across the continent the rain cup was full – 14.5 cm. Actually it holds about 15 cm but who knows if I got there just in time to measure the four day rain event or if the rain had been splashing out over the lip for days?

And in other bigger more exciting news – we’ve now got a memory card in the camera that holds more than 4 pictures at a time! 2000, to be exact. So, hhhhere’s Jengo… Hard to tell from the picture, of course, but he’s listening to jazz on the radio. 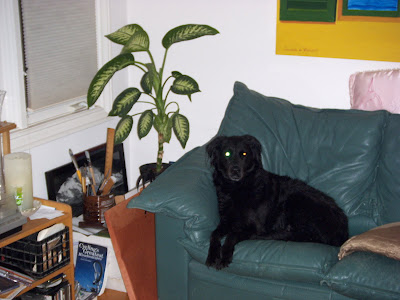 Because of this new photo ability the blog could be at a crossroads here if you know what I mean. Something to look at, at last! Assuming I ever remember to take the camera out with me on adventures.

Merry Winter to All! It becomes official at around… well, I can’t figure it out exactly – sometime today. We’ll call it right… now.
Posted by mindful mule at 12/21/2010 5 comments:

The Anthropology of Turquoise:
Reflections on Desert, Sea, Stone, And Sky
by Ellen Meloy
Posted by mindful mule at 12/16/2010 No comments:

I finally got my hands on (I mean, feet in) a pair of fivefingers – the glove-like running shoes. Don’t tell Vibram, it might hurt their feelings, but I picked them up in one of those gag, “white elephant” holiday gift exchanges. They are the Sprint model.

I think they might be about one European size too small for me, although according to the Vibram shoe sizing chart they’re actually a size too big. Feet and shoes, though, are not mathematical equations – hence the saying, “if the shoe fits, wear it.” I haven’t run in these yet because they feel too small so maybe I’m not qualified to write a true and fair review yet but here are a few (mostly negative) thoughts. I’ve worn them around the house and am wondering if maybe they’ll stretch out just a bit so I can give them a run but not sure yet.

These shoes seem to pride themselves on being minimalist. To me, they still seem over built. The two Velcro heel straps and one larger Velcro strap over the top of the foot seem unnecessary. If I keep these I’ll probably cut those all off. Keep in mind my perspective, though, as I’m the guy that doesn’t tie his regular running shoes either – they’re knotted loosely enough to easily slide on and off – that works well for me. They don’t fall off. And neither would these fivefingers without their straps. The inner lining is more than enough to secure them to the foot especially since you’re supposed to make sure they fit just right to begin with.

The rubber soles are much beefier than I expected and really too much for my liking. The worst part of the sole is where it wraps up and around the front of each toe. My toes end up sticking and clicking together. Maybe with use this problem would wear itself out as the rubber lost its tackiness. They should keep the sole on the bottom. I’m not planning to be kicking around a bunch of rocks, although I suppose that is the intended purpose of the rubber toes for people that use them out on trails – anti-toe-stubbing technology.

I’m wearing the fivefingers right now as I type this. They’re starting to feel a little better as I wiggle my toes around but they’re still a little annoying. The idea behind these shoes is make you feel like you’re running barefoot but at the moment they feel even more restrictive then a regular light shoe like the cross country racers I ran in during the early part of this year. And at least with those, I can wear them out to the pub or wherever if I feel like it. There’s no way I’d wear the fivefingers anywhere/anytime but night runs or in the ocean or a river rafting trip. At least these are all black so they’re a little less noticeable than the other bright colors available.

I’m not sure how much these cost as I got them for free. I think they may be sort of expensive – in the $80 range. It would feel a little strange to take the scissors to such a valuable shoe but I think I’d like them more if I cut the tips of the toes off and all the straps. I think at some point though you just have to avoid the silliness of trying to mimic the natural human foot and just go out running barefoot.

Oh, and one more thing, Vibram. You really (obviously) ought to call these FiveToes as hardly anyone runs on their hands.
Posted by mindful mule at 12/13/2010 No comments:

The Lost Cyclist
by David Herlihy

Unbearable Lightness
by Portia de Rossi
Posted by mindful mule at 12/07/2010 No comments:

lessons from a tire pumping nerd

Don’t be a tire pumping nerd. Or don’t bother being one, anyway. It’s okay to ride your bike without repumping the tires every time. And yes I’m talking about the road bikes with the skinny tires. And no, I’m not talking about the urban bikes with the fat tires although you needn’t pump those either very often like I’ve been doing with Mindful Mule lately. I can’t even remember the last time I pumped up those tires. They’re 26X2 and they’re pretty low on air but they roll and it’s cold out and so when I get out there I don’t want to pump, although that’s warming, I just want to ride. I don’t want to fiddle with valves and shit. It’s too limiting.

And it’s the same with the road bikes. If you think that you have to repump your tires every time and put on your special riding costume and fill up your water bottle with poweraid and plan a route and find a partner or group to ride with then you’re never going to get on that bike and ride it down to the store or to the pub or even to work for that matter because it’s just too much of a pain to do all that every time you leave the house. Your bike just needs to be ready to ride all the time. And if you rode that race bike last weekend it probably already is.

If you want to tuck or roll your pants I’ll allow that, though, as I do that a lot. I’m a bike nerd, too. Hello, my name is Jonah and I’m a bike nerd. Sometimes I wear that costume too, so I know how it can be, but you’ve got to let your self be free. There are so many roadies out there that aren’t riding their bikes but for exercise. Please go somewhere on you bikes, too. Ride free.
Posted by mindful mule at 12/06/2010 No comments:

I had a super slow run through the Arroyo this week. It was strange. I was so low energy I could barely call it running. Jogging maybe. Although it felt more like speedwalking. Although the word speed shouldn’t be applied here so I’ll call it slogging – slow jogging. To be fair, this was really only perceived slogging – my time for the run was a little on the slow side but not outlandish – 10m/m.

But sometimes it’s really good to slow down. To listen to your body when it wants to go slow. Not that today my body was telling me to go slow. My legs felt fine and my form held through the distance well. I just had no motivation. Some element of the whole was missing. Maybe it was my mind that wanted to go slow.

I was talking about my running habits with a friend last weekend and telling him about my Arroyo route. I mentioned something to him that I’d never really verbalized before: in addition to running in the Arroyo, I tend to Arroyo via a run. In essence, the run being merely a vehicle to accomplish the main activity: being in the Arroyo.

This week that became a bit more apparent. I wasn’t really enjoying my run but still it seemed like the best way to tour the area. A few people down there walking dogs or running or birding and that old ranger guy on his horse (the mellowest beat in town.) Toward the end of my journey down there it hit me that it was totally quiet. I could hear all the birds and crickets and the slight gurgle of the (channelized) creek. Dense green native foliage spilling down the hillsides all around me under the slightly dulled, thin-cloud-smeared blue of the still, heavy sky. I could have been in Bolivia. In fact, I’m pretty sure I could smell Hawaii. It was a moment I’d been missing lately.

And just like with meditation or yoga or chanting or praying or what have you, all that was needed was a simplification from the normal, a simple slog, away from goals and cravings, to slip briefly out of the envelope and recall.
Posted by mindful mule at 12/04/2010 No comments: