Racing really throws a wrench into the system.  It (life, the world, the mind, the body, everything) is just not the same on race day. The weeks before and the days after aren’t exactly the same, either – erratic oscillations between extremes of mental and physical and psychological and probably some other –ical states. I think it’s what is called crazy. I’ve been a total wreck. And during the race! Man, then it’s like time and space do not even exist – total detachment – just pound and mountain, pound and mountain, pound and mountain… then eventually you surface again and you feel good again and you want to run! and you know why you went to the trouble.
Posted by mindful mule at 5/29/2012 4 comments:

tranquil moments before the mountain run

As my friend used to say, “tranquilo campeon” – loosely meaning, “hello my friend, I recognize your power, and our power, and we will work strongly together when the time comes, but now we wait, still, a little bit at a time, a trickle, and when that Sun breaks over the ridge on the sacred morning, then we will unleash everything and charge up mountains with Lion’s heart and sprint down ravines with Deer’s legs and give everything up to the Spirit, to the Mountain, knowing she will be proud and knowing just a little of what it fees like to be champions, to be mountain warriors, to be runners…” This being my rather long mantra-imagery leading up to this weekend’s Mount Wilson Trail Race.

I had a dream about trail running. I love trail running dreaming. I was running along through low chaparral just below a rolling ridgeline. Someone, perhaps my spirit guide, was running just up ahead, when all of a sudden, the trail disappeared. Not like it petered out or we lost it but it just vanished from under our feet. My guide kept on running, hovering, it seemed, just over the sagebrush. This was a lot for my mind to wrap around. How does one hover-run? I’d felt like I was flying when running before but never actually lifted off. This was a big leap of faith to follow.

I mean, it sounds obvious, but without a trail to follow, running through the mountains would be an altogether different experience. But there have always been trails to follow. Animals, humans that have gone before us. We follow the past and become the future. That’s all there really is to do, actually. And the hovering is just that moment of faith in the present, knowing the next footfall will come, that makes it running, living, dreaming…


Early ride through the fog monster to find the sun and spring up on Brown. I haven’t been up there for a while. But I was easily reminded of why I should get back up there again soon. It’s still, and always, my cool, awesome, soul mountain friend. 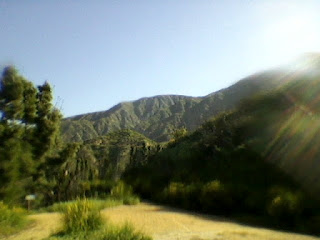 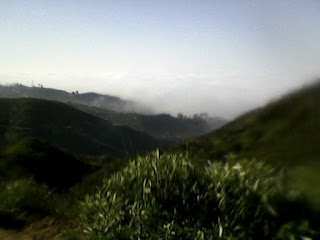 The Sailor From Gibraltar
by Marguerite Duras, 1952

There was a little rain in the morning. Drizzle, really. Or just mist, at least. Heading up the foothills, again, again, the rain grew heavier, as is normal. But still it seemed just mostly light, and looking closely up into the clouds I could almost sense the approaching light, the sun, a bit of warmth seeping through. It wasn’t cold, really. And I didn’t expect the rain to continue, which is why I was continuing up through the foothills, in the rain, without a rain jacket, in shorts, and a fleece pullover.

I actually thought the mist would have gone by the time I got going but it only increased with elevation. But it was fine, it was good. And in fact, even though I’d neglected to bring my trusty rain cape along for the ride, I went over the circumstances in my mind and I decided that even if I’d had it with me it wouldn’t have been much use to me riding up the hill, where the trapped perspiration would likely have equaled the falling precipitation. And at least without it there was still some breeze for evaporation.

Eventually, just as I was almost there, or at least almost to the top of the last ridge, after which I could cruise easy for a while and rest before the final push up, this particular destination way the heck up there at the base of the real mountain region, the wilds, it started falling more like rain than mist. But I was still sure it was going to be a beautifully grey day in just a matter of moments. And in fact, within just a few blocks the drops were gone and I was starting to dry out with the wind, speed.