I was riding around in town this evening on Mindful Mule just after sunset/happy hour when I noticed the pink light from the sun still setting up on Brown Mountain. It looked incredible and I had no place else to be so I thought I’d head in that direction and see if maybe I could at least get a better view of the alpenglow or maybe even make the trailhead or up a ridge or two. I made it to the trailhead just before eight. It was getting dark but I didn’t have my lights turned on yet. There was a group of riders just coming off the trail and a few others trickling down a little further in. I rode up just a couple miles to a really nice “inspiration point” type spot overlooking the lights of LA. It was really pretty awesome. I don’t know what my problem is that I’ve never done that before. I should be up there at night, or at least dusk all the time. It was like 95 degrees today but at that hour after the sun had gone down it was quite nice riding. The way back down was a little trickier. I turned on my light for some of the rougher sections of the trail but kept it off for most of the descent to more fully experience the night. When I’m out on the trail during the day the snakes usually turn into sticks but tonight a stick turned into a snake – a good size friendly rattlesnake. A little later down the trail I also, weirdly, came across a large frog – um, okay – it’s different up there at night. It’s cool. I’m thinking there will have to be a full moon ride sometime soon. But who would go with me? On the way back into town I really wanted to share this experience with someone so I cruised around looking for people but realized Mindful Mule was just chasing the shadow of his long-lost brother.
Posted by mindful mule at 8/25/2011 2 comments:

thou shalt not steal bicycles

My friend’s bike was stolen recently. Stolen! The bastard(s)! It was a cool bike – a fixie. It was parked and locked right outside of our local pub in the middle of a weekend day. So what if it was a cheap little lock. I can’t understand stealing someone’s bike. It’s the worst.

So now I’m feeling less ridiculous about using two locks lately. I mostly use two locks so that the bike is a little more stable at it’s rack. It makes it easy to lock both wheels and the frame. And it keeps the front wheel nice and straight so the bike looks sharp, not like it’s dangling and about to tip over.

I don’t think stolen bikes are recovered very often but maybe I should record my bikes’ serial numbers for the first time now, just for good luck. It seems like a bit of a pain, though. The numbers are mostly covered in greasy road grime so I’ll first have to clean them off. And then either get down underneath them somehow or turn them upside down. And then save the info somewhere. And then remember where I saved it. And then if something happens, have to deal with the cops that are like, ha ha, okay, sure, we’ll keep our eyes out for your bike, kid, ha ha.

How ‘bout if you just don’t steal my bike, okay?

Gaviota (or) The Seagull

Gaviota Beach is just outside of Santa Barbara. There’s a big train trestle there that at first seems a little strange to camp under but quickly grows on you as a nearly quaint historic feature of the landscape. The campground is pretty tight and parking lot-ish but serves well enough once you realize that you’re going to be out in the hills or the water or along the coastal road for much of the time or it will be dark and you’ll just be cooking s’mores and drinking red wine, eyes all skyward with the stars and the full moon rising.

Two quiet roads: one along the coast, one an inland valley leading to a trail that takes you up to some cool sandstone cave overlooks. Very nice routes but short. We ended up camped right next to another running couple which was kind of fun. They seemed pretty serious. One commented that she’d hoped she’d find more miles there. I thought there would be more trails, too. Good for a few miles though. We ran into each other a lot. 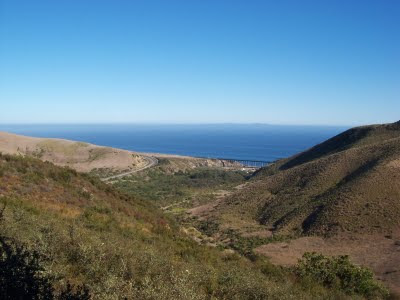 of mules and men

Continuing along, again and again, the same dusty route through the Arroyo, the distances and exact details varying only somewhat, sometimes only to the top of the rise, sometimes through to the mountains. Each pathway has its rut, its groove, its channel, invisible to the eye but there in the geography of place and mind, slowly, steadily etched in from the experience of repetition, each foot placement still existing. The body remembers the route, digs in, knows how to solve the step patterns through the rocky places, where to coast and where to charge, how to turn off the mind, get through fatigue and dehydration, how to keep going, to work. It could keep going, could go double but for a deal made, a distance, a turn-around. After the turn it’s all reeled back, slowly, calculated, until home is sensed, it’s right up ahead, nothing left to save, legs unchecked, speed carries us home, back home to rest, to be done. But still a glint for the soul.
Posted by mindful mule at 8/11/2011 No comments:

Islands in the Stream
by Ernest Hemingway, 1970

I’m just about there, to a thousand miles. Seems like the last hundred took a while. These have been very good shoes for me for thirteen months. I may just keep running in them for some time now. I’m still considering removing that plastic plate from under the arch. Not sure what that will do or if I can even remove it cleanly but seems like an interesting project/experiment and since the shoes are quite used by now I don’t feel so bad about destroying them. Except maybe for sentimental value which will probably wear off quickly and/or by the next time I take a pair of shoes to a thousand. 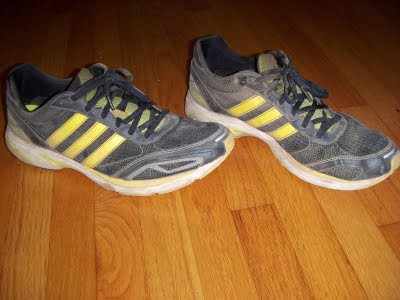 What have these shoes helped me to understand?

In the words of Fox Mulder, “Trust no one.” Especially anyone from the shoe industry when it comes to recommendations about how frequently to replace your running shoes. For a long time the general rule of thumb has been in the 300 to 500 mile range. But that’s really not as much as it sounds. 300 is like nothing. At that distance they’ll still have that new shoe smell unless you’ve been running through bogs or something.

You can’t trust the shoe to tell you how to run. You’ve got to run with right form and force those shoes to come along for the ride.

It’s totally okay to run through streams in your running shoes. They will dry and quick. You won’t ruin your shoes. And on hot days it’s actually quite refreshing.

Trust yourself (because you’re not no one). This is a tough one. Which part is the self and which part is the brainwash. But if your shoes are taking you places and you’re feeling generally good and you don’t quite yet have holes burned through the soles then you’re probably fine.

If Adidas used the same yellow sole material on the inside of the sole that they have on the outside these shoes would easily go 2000. The inside black and white section wore down much quicker. Maybe that’s a higher wear area but I’ve the impression that that was a softer material too – maybe for better “feel.” 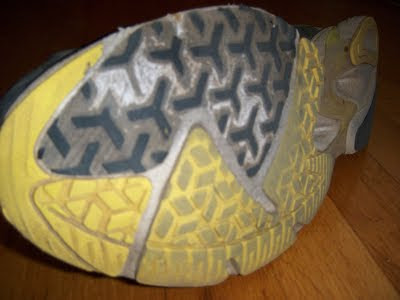 It’s okay to run in regular/real running shoes even though there’s a big push right now toward barefoot-style shoes.

Running is a great way to experience the Arroyo.

I pay too close attention to the numbers.