My feet get cold a lot when I’m riding. Especially now that it’s winter. And I know that southern California doesn’t really have much of a winter compared to a lot of other places out there in the world. However, in some cases, winter in SoCal can still be quite cold.

Part of the reason for this is that it’s so warm here. What? you say. Okay, bear with me. Let’s say you wake up on a free-day and are all about going out for a nice bike ride. It’s still early and about 40 degrees so you figure you’ll do the coffee thing and get some blogular motivation. It’s forecast to be 62 degrees and sunny later so no reason to rush out into the cold.

This might sound warm to many of you and it is but keep in mind that if it’s going to be sunny and sixty later then you’re not going to be able to ride in a parka. But you can’t really ride in shorts and short sleeves either because it’s surprisingly cold around the edges – in the shade, on the descents, when you stop for an outdoor espresso.

Pull-on cycling sleeves and leg warmers are nice but you’re still probably going to want a windproof vest of sorts and if you start before 10am you’re going to be cold until your blood starts going and the leg warmers are going to get too hot at just about that same time so there’re knee warmers which are better but I don’t have those because all those sleevey things are actually quite costly and I figured that if I was going to purchase something to keep my legs warm I might as well get the full length version rather than the shorter knee warmers that would leave my calves exposed and vulnerable.

But try wearing leg warmers when you’re running and they’ll be at you ankles within half a mile. Probably knee warmers, too. So I’m thinking maybe knee braces would be good. Just those simple sleeves that you can pick up at the pharmacy. But those are pretty tight and restrictive and I don’t want that. I briefly considered stockings, you know, like pantyhose, but then thought I’d be too embarrassed. I mean I want to look somewhat normal out there for some reason even though I really do think I’m onto something there – they’d be perfect and utterly packable!

So here’s the compromise: you know those old wool socks you’ve got in your drawer that you’ve already darned a dozen times but have reached their limit of repairability – just too thin now and too many stitch-scars that you can’t stand to stand in them any more but the ankle part is still in just fine condition? Okay, you cut off the toes on those socks. I know. It will kill you to do it. What if it doesn’t work? I thought. What if I ruin these perfectly unusable socks?

Okay fine I’ll just do it in the interest of experimentation. Now you end up with the perfect shorter than a knee warmer, knee warmer. And the original heal of the sock now becomes the perfect kneecap and holder-in-placer. And! If you get too warm knees or two warm knees then you can just slide them down and people will think you’re just wearing longer socks! And they’re greatly packable, too.

I’m writing this during the initial excitement/try-on stage and haven’t even tested them outdoors yet – don’t even know if I’ll ever have the courage to test them out in public at all but do think that maybe when I’m by myself on a ride or maybe up in the mountains on a run where nobody will ever see me that I’ll give them a go. 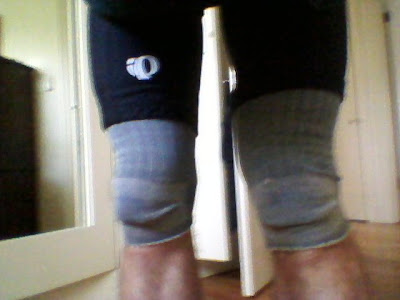 Too much? Too awesome? Genius or Dunce?

Too awesome, yet I probably wouldn't let people who know me see me on those. :) Just joking. Here, I just went out biking in low 20s degree weather. I feel like here its either too hot or too cold.
Couldn't you wear those tight, padded, windproof biking pants?

Thanks, Vertigo. It sounds cold out there. Cycling pants/tights would work great for these cooler rides. Maybe I should try to find some.

Ooh, I like them!
I have definitely NOT figured dressing for biking in the cold, which is why I probably wait until it's at least in the mid-50's before I start out on any ride!
This is a really fun site for gear for cycling:
http://allseasonscyclist.com/

Thanks, Kristina. Just checked that link out – I think I need those Moose Mitts! Let’s go riding soon.